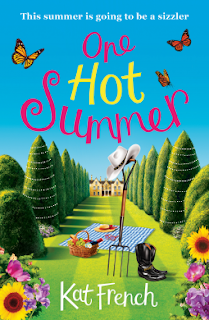 Being married to a celebrity isn't all it's cracked up to be, especially when that celebrity has a very public affair with his co-star…
Alice McBride is determined that the one thing she won't lose in her marriage breakup is Borne Manor, her beloved home, but she gets more than she bargained for when she rents it out for the summer and a sexy cowboy comes to stay.
Country music star Robinson Duff has had his own share of heartbreak and needs somewhere quiet to hide out for the summer. Neither Alice nor Robinson are in any position for romance; the timing is terrible and they're both rebounding like out of control frisbees.
Can a holiday romance help mend their broken hearts. Or will it just make things even worse when the long hot summer comes to its inevitable end?

I knew as soon as I saw the gorgeous cover, that One Hot Summer was a book I would enjoy. What I didn't realise was that this would be one of them books that completely took over my life.
I literally devoured One Hot Summer in a day and would thoroughly recommend this.

One Hot Summer starts off with us being introduced to Alice McBride when she discovers photos in the paper of her film star husband, Brad, in rather compromising poses with his co-star.
As Alice quickly kicks Brad our of their marital home, Borne Manor, realisation soon hits her that she is on her own in a house that she adores and left wondering how she will afford it.

Soon enough it is decided that she would rent out Borne Manor and move to a van in the garden with the intentions of doing up the attached boat and tree houses to form a glamping site.

Enter Robinson Duff.
Robinson is a successful country singer but is dealing with his own heart ache and decides to escape to England for the summer.

Kat French wrote One Hot Summer in such a way that I completely fell for the love story of the English rose and her country cowboy... I could feel the tension between the two of them ooze of the page and this led me to keep reading to see how their summer panned out.

When Alice and Robinson are alone and in their bubble, they are happy in their 'summer holiday romance' agreement, but throw in their ex's and his pushy manager and everything is threatened to finish early.

Alongside the leading pair, there is a wonderfully eccentric group of sub characters which gave the book some humour next to the romantic tension giving a great balance.

One Hot Summer has everything you would like in a romance novel - it oozes sexual tension yet is full of tender moments. It made me giggle, it made me sigh in awe and it had a beautiful backdrop of a setting.