Always The Bridesmaid by Lindsey Kelk

It feels like it's taken me ages to read Always the Bridesmaid, when in truth it's only been a week and that was purely down to the fact that it was my birthday and I was a busy bee!

Last Saturday, May 9th, I was privileged to meet the lovely Lindsey Kelk at Southampton's West Quay branch of Waterstones. 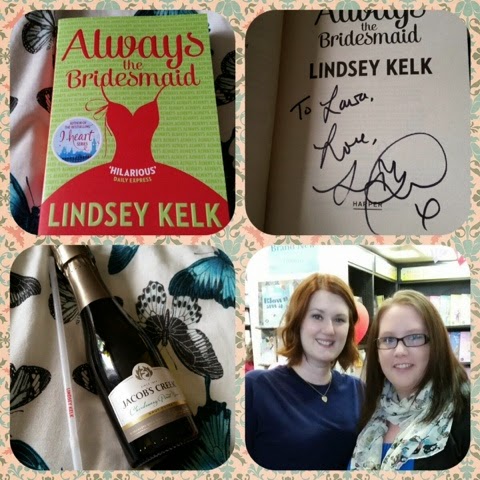 I'd never been to a book signing before for one reason or another and having seen Always the Bridesmaid down my twitter feed for weeks it just seemed right that I attended... probably helped that my other half said he would buy the book for me as a gift. ..yay!

Lindsey was absolutely lovely and happy to chat, but I won't lie... I couldn't get out of there quick enough... I did have a new book to read ;)

I started reading Always the Bridesmaid as soon as I got home - went down nicely with the free bottle that came with it haha! 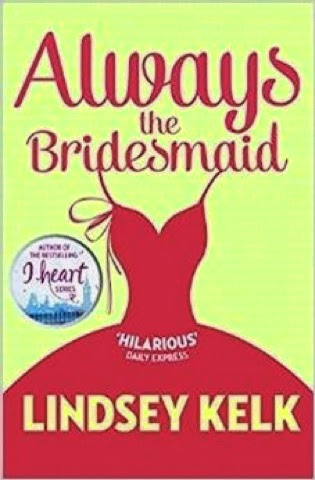 One best friend is in wedding countdown while the other is heading for a marriage meltdown. And as Maddie juggles her best chance at promotion in years with bridezilla texts and late night counselling sessions, she starts to wonder - is it time to stop being the Bridesmaid?

Page one of Always the Bridesmaid starts with the title 'My Bridesmaid Journal'.
There is then a list which had been filled out by Maddie Fraser, the books main character, containing basic information on the wedding - the brides name,  how they met and how long they've known each other for example.
The last question asks how Maddie feels being a bridesmaid and her honest answer, which states she would rather pull her womb out with a rusty coathanger,  has then been crossed out and replaced with the simple word 'blessed' - this had me  giggling from the get go. .. I knew instantly that Maddie was one of those characters I was going to love with a story I'd be addicted to and I wasn't disapointed! What I also liked from the book was that each chapter was a date from the bridesmaid journal, each one with the two lines;
Today I feel:
Today I am thankful for:
Some of Maddie's replies to this were brilliant and you really got a sense of Kelk's writing wit and ofcourse an insight to Maddie's character!

Maddie is an assistant for an events company with a bitch of a boss, she's unlucky in love -her ex boyfriend Seb cheated on her and has just become a dad, and her family think she's letting her life waste away.
There's only two main stable things in her life, her best friends Lauren and Sarah.

When Lauren announces she's getting married and would Maddie's help with the planning, little did Maddie know that Lauren would become the ultimate bridezilla! Maddie is confronted with a three month time scale and requests you'd need to be super human to fulfill, yet being the friend she is she puts up with the demands and plan changes... even at 4am!!

Whilst Lauren's life is full steam ahead, Sarah's is falling apart when her husband announces he wants a divorce. Maddie is stuck in the middle tying to keep one friend happy and the other from an emotional breakdown.... and whilst she's doing this, she's also up for promotion at work.
A job that Sarah has also applied for, a job with even more demands than Lauren's wedding...

There's also Tom who has specifically requested Maddie plan his mum's birthday party... purely due to the massive crush he's got on Maddie, the trouble is... Maddie is sleeping with his friend Will!

Over the course of the three months leading to Lauren's wedding, Maddie's life gets complicated to say the least and it all comes to a head when the job she needed to impress with for promotion goes hideously wrong and she discovers she's actually Will's bit on the side... A full blown melt down occurs resulting with the three girls not talking and Maddie out of work.

As with all good chick - lit books, Always the Bridesmaid does give you a happy ending.
Eventually the girls reunite for the wedding and Maddie and Tom, or Madom as ive named them in my head, get together (yay!).
Sarah also declares that she was offered Maddie's job but turns it down... now that's friendship loyalty, and they decide to set up their own party planning venture... which is fab as it leaves the story open should Lindsey Kelk decide to return to Maddie's life... I for one have my fingers crossed!!

Always the Bridesmaid was my first Lindsey Kelk read and I can say I thoroughly enjoyed the book - I've now added her "I Heart" series to my TBR list ;)