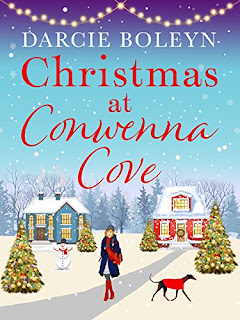 When Grace Phillips travels to Conwenna Cove to help her parents move there 30 years after their honeymoon in the village, she sees why they fell in love with the place. The festive decorations, carols in the air and constant supply of delicious mince pies certainly make it hard to leave. Grace soon meets local vet Oli Davenport and initially finds him rude, but learning about his passion for animals and how much he cares for his two kids helps Grace to see a softer side to Oli.
It’s been two years since Oli lost his wife to cancer. Though he loves eleven-year-old Amy and five-year-old Tom more than anything it’s hard to be mum and dad. He has no interest in romance until he crosses paths with beautiful and kind-hearted Grace. The sparks fly but both Oli and Grace are holding onto fear about letting someone into their heart.

Today I'm delighted to be kicking off the blog tour run by Canelo for the latest festive instalment from Darcie Boleyn - Christmas at Conwenna Cove. Although this is the second book in the Conwenna Cove series, it can be read as a total standalone novel , that said, if you read Summer at Conwenna Cove then there will be a few familiar faces making small cameo's.

Christmas at Conwenna Cove is a great, sweet read and perfect to curl up with this winter if you are after a delightfully romantic festive read.

We return to Conwenna Cove with Grace and Oli's story, Grace being in the area to help her parents settle in to their new home to see out their retirement years, and Oli is the local vet.
Grace and Oli meet quite early on into the story and although the attraction is obvious, both are wary and for good reasons too, I won't go into details too much as I dont want to ruin the bulk of the plot lines for you so lets just say they both have fragile hearts and over the course of the festive period,  we see Grace not only grow closer to Oli bit to his two young children, Amy and Tom, too.

Darcie Boleyn has perfectly captured the essence of Christmas - not only does she write giving a great description of Conwenna Cove in Winter, she has also managed to capture the emotions of the characters - I often felt my heart breaking and eyes watering at the same time as chuckling away at the optimism and enthusiasm of 5 year old Tom, who for me was my favourite sub character bringing light relief to the heavier story lines and, lets face it - a child's excitement is what makes Christmas, right?!

Christmas at Conwenna Cove left me feeling warm and fuzzy with its wonderful characters, beautiful settings and in depth story lines - a brilliant festive story.