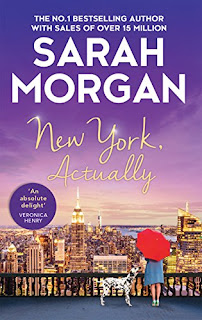 Meet Molly
New York’s most famous agony aunt, she considers herself an expert at relationships…as long as they’re other people’s. The only love of her life is her Dalmatian, Valentine.
Meet Daniel
A cynical divorce lawyer, he’s hardwired to think relationships are a bad idea. If you don’t get involved, no-one can get hurt. But then he finds himself borrowing a dog to meet the gorgeous woman he sees running in Central Park every morning…
Molly and Daniel think they know everything there is to know about relationships…until they meet each other that is…

Whilst writing up my review for Sarah Morgan's latest novel, Holiday In the Hamptons, it suddenly occured to me that I had some how missed doing the review for the forth book in the From Manhattan With Love series - New York, Actually - so I apologise if this is a bit short but it's purely from memory.

I loved the first three books in this collection from Sarah Morgan - Sleepless in Manhattan, Sunset Over Central Park & Miracle on 5th Avenue where we got to know Paige, Frankie and Eva and was super excited to hear that Sarah was writing a further 3 books from the series.

However when I got a copy of New York, Actually, I was a little apprehensive as to what was to come as I wasn't sure if a completely new set of characters would work for me due to resinating so much with the three girls previous mentioned.
And although the three main characters of the three new books are unfamiliar, we have had cameo's from two of them in the form of Harriet and Fliss - the dog walking twin sisters that Urban Genie work with.

New York, Actually is the story of the twins' older brother Daniel - a divorce lawyer who is not only protective of the girls, he's also protective of his heart.
That is until he see's Molly out running with her dalmatian dog, Valentine.
Something in Molly intrigues Daniel and in his quest to grab her attention he goes to some lengths - including borrowing one of the dogs that the twins have in their care to walk, coincidentally along the same routes as Molly and Valentine!

Molly on the other hand has also had a tough time with her heart so has built up a protective wall around it and now advises others through an alias as an online relationship consultant.

Both Molly and Daniel are strong willed with their views on love but the more time they spend with each other and the closer they get, each start to question their feelings for the other.

New York, Actually is full of ups and downs as they each battle their feelings, a story of love, new beginnings and understanding, and with cameos from previous characters, there is nothing to be concerned about by picking up this gloriously romantic read.