Review | The Second Love Of My Life ~ Victoria Walters 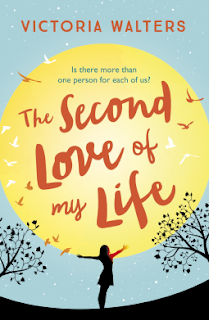 Victoria Walters' debut novel is a powerful tale of love, grief and survival, perfect for fans of Cecelia Ahern, Lucy Dillon and Miranda Dickinson.
In the small Cornish town of Talting, everyone is known for something.
Up to the age of twenty-four, artist Rose Walker was known for lots of things: her infectious positivity; her unique artistic talent; her second-to-none cookery skills; and, of course, her devotion to childhood sweetheart and husband Lucas.
But, two years ago, all of that changed in one, unthinkable moment. Now, Rose is known for being a young woman who became a widow aged just twenty-four.
Rose knows that life must - should - go on. But the prospect of trying to carve out a future for herself is one she can still barely entertain. Until a newcomer, Robert Green, arrives in Talting for the summer...
Can Rose allow herself the chance to love again?
Get lost in Victoria Walters' immensely touching début novel, and discover a world that will capture your imagination and heart.

Where on earth do I start with this review? I'm just going to apologise now as I've written the below words three times already and I really don't think my review has done the book justice. Its definitely one not to be missed on your summer holidays this year!

The Second Love Of My Life is a gorgeous début novel from Victoria Walters, I was briefly introduced to her writing and the settings of this book in her short story prequel, The Summer I Met You, which was quite frankly was bloomin' amazing - check out my review for that, here.

The Second Love Of My Life though, was on a completely different level. It absolutely blew me away...

Rose is struggling. Not only with her art work but its fair to say life in general. She was happily married to Lucas, her childhood sweetheart, but tragic circumstances took him away from her.
To begin with we aren't sure what really happened to Lucas but an incident at Rose's work soon makes it clear - but that is just one small element of the story. Other elements include Rose's relationship with her best friend Emma and her husband John, and how Rose deal's with things happening in their life that she feels should be happening with her and Lucas. There's also her parents in law whom are grieving in their own way and the book looks at how relationships continue as life paths change - Rose really is a remarkable character.

Rose's world takes another unexpected turn when Robert comes into her home town of Talting. He is interested in buying her old art work, and there is instantly a little spark between the pair with is quickly replaced on Rose's part with guilt. However they spend more and more time together but no sooner as a force pulls them closer, one pulls them back - if it wasn't her guilt it was Robert closing up - this left me as the reader pondering over what this man's story was or what he was up to...
I didn't have too long to wait and I was quite shocked at the outcome of his background which happens around the middle of the book  - yes I know I'm being utterly vague but that's just tough as I completely urge you to read this book and will go as far as to say this could be the book of 2016 for me!

The Second Love Of My Life completely played with my emotions. It made me cry on more than one occasion and after my tweet in the pic below, I felt it was going to be a really soppy read.

Yes there were emotional, hang on I need tissue moments but equally there were parts within the book I felt like I really connected with the story too,  I had to pause reading to take a moment and process it. It's made me think on things that have happened personally within my life, things I'm forever beating myself up over or blaming myself for, but Rose's story has shown me that we get a second chance in life and it should be lived fully as some things can't be changed.

I loved seeing Rose find herself again - not just in her love and work life but with her friends too - its hard to grasp when your grieving how the lives of others continue forwards.

The Second Love Of My Life was in no way a depressive book though - there were some really touching moments and Roberts clumsiness brought humour to the story, but there was also a real lightness to the book which kept the story interesting and fresh.

Victoria Walter's has a delightful writing style. There was so much written on the pages yet the words, which were told by Rose in the first person, flowed beautifully.
There were a lovely set of characters, each with a special link to Rose, but whom came with realistic and true challenges to people grieving and moving on.

The Second Love Of My Life was also brilliantly descriptive. There was a particular part in the book where I can a 'lightbulb' moment - I'm the first to admit I'm a sucker for pretty book covers, and this one is no exception, however at this one point of the book, Rose's art work is being described and as I was reading it, not only could I picture the paining on the canvas, but I could see the book cover unfold and I was finding myself thinking 'ah that's why there's trees and birds'
There are pretty book covers and then there are pretty book covers that completely relate to the story, and this is one of them.

For me, the whole book was a joy to read and took me on a complete rollercoaster of a ride. It shattered my heart then just as I was mending, Victoria threw another curve ball to shatter it once more. As Rose was building her life up, I felt I was passing her the bricks.
Even though its a work of fiction, it was true to life too - we are often thrown curve ball's or dealt a rough hands which sometime's feel like they are on repeat every time we pick ourselves up and Victoria reflected on this in her story with Rose.

For anyone that actually reads my reviews (thank you!) you will know that I adore a good epilogue - this didn't fail me one bit and I enjoyed the fact it was set quite a while later...
Honestly, I just cannot praise this book enough!

I've no doubt that anyone who picks up The Second Love Of My Life won't enjoy it or get something positive out of it. It's just one of them books that will stay with you for a while, and for that reason there is no other rating I can give other than the top one of being placed on my
extra special books page.

I would like to thank Victoria and Frances at Headline for providing an ARC of
The Second Love Of My Life
via NetGalley in exchange for an honest opinion.