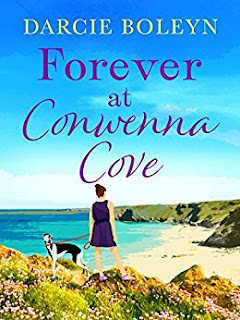 Following heartbreak, Zoe Russell found a haven in Conwenna Cove.
As the owner of the village diner and a volunteer for the local greyhound sanctuary, she’s happy with her peaceful life.
Local surfer Nate Bryson plans to leave Conwenna and see the world.
He wants to shake off his reputation as a ladies man and start again somewhere new. Before departing, Nate decides to raise funds for the dog rescue home as a way of giving back to the community.
When Nate approaches Zoe to help with the charity event she sees there’s more to him than meets the eye. Nate can’t believe he’s failed to notice the kind and beautiful woman right before him. But can two such different people ever be together, especially if one of them is determined to leave?

Despite my reading mojo being AWOL of late, When I was asked if I would like to review and kick off the blog for the last book in the Conwenna Cove series by Darcie Boleyn, I jumped at the chance.

I'm really going to miss being in Conwenna Cove, all of the characters Darcie has written about have all had troubled times and the cove almost has heeling powers... with its idyllic landscapes and friendly locals it's certainly a holiday destination thty I would go to!

In Forever at Conwenna Cove we meet Zoe and Nate.
We've met Nate a few times in the previous two stories so I was really pleased to see he finally had a starring role. He's currently working in the local cafe that his aunt and uncle own having moved to Conwenna after losing his father.
Nate is a bit if charmer, a surfer dude with a ladies man reputation, however with Jack and Oli having now settled down (Jacks story is with Eva in book one, Oli with Grace in book 2!) He is started to think about his life and achievements. He wants to settle down but has always wanted to travel too and plans the latter after he organises a fundraising event for the local grey hound charity.

Zoe is a new character who owns and runs the local diner. She escaped to the cove and made a business for herself. I don't want to say too much about why she has come to Conwenna as the reasons why she moved here is quite a big part of her and Nate's story, but she has had a troubled time and again Conwenna seems to be helping her.

Zoe and Nate meet when he is organising the fundraiser and as with all good stories, they grow close and form feelings to each other.

I wondered where Darcie could go with another Conwenna tale but this one is just as fresh as the previous two and has some real challenges thrown in to the mix.
I loved the sub plots of Nates mother and Zoe returning to to home town, they tied in nicely with both their pasts and their present lives.

And reconnecting with the other characters from the Cove was a delight - especially cheeky  little Tom (if you know, you know... right?!)

I really hope Darcie decides to take us back to Conwenna Cove at some point as I'd love to check in on the whole gang and see what they are up to!

As with the other books, this can be read as a stand alone novel but I like to read things in order and feel you will benefit from doing so in this series.

Forever at Conwenna Cove by Darcie Boleyn is a pure gem to read!