Review: What Happens At Christmas by T A Williams 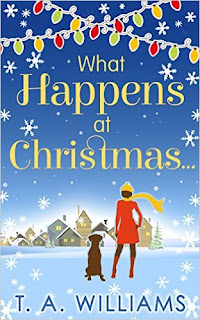 For the perfect Christmas…
When career-girl Holly Brice learns that her estranged father has died, she decides to take a trip down memory lane and find out about the man she never knew.
Arriving in the sleepy little Dartmoor village, she’s shocked to discover that she’s inherited the cosy little cottage she remembers so fondly, a whole load of money – and her father’s adorable dog, too!
Head to snow-covered Devon!
And as the first snowflakes begin to fall and Holly bumps into her gorgeous neighbour, Jack Nelson, life gets even more complicated! Men have always been off the cards for high-flying Holly, but there’s something about mysterious writer Jack that has her re-thinking her three-date rule…

What Happens At Christmas is the first novel by T.A. Williams that I have read, and what a lovely, heart warming story it told.

The book starts off with a prologue setting the story up, explaining that holly Brice had been summoned to a solicitors in order for a reading of her fathers will, a father that she hadn't seen or heard from in nearly 20 years.
The first shock for Holly is that he has left her his quaint cottage in a small Devon village, and the second was the rather large sum of money she was to inherit too.

The story is then told over a ten day period, with each chapter being a day leading up to Christmas. As Holly sets about sorting her fathers belongings, ready to sell the cottage, she gets acquainted to the other villagers who have nothing but nice words and high praise for her late father. Holly also becomes close to her neighbour, Jack, as well as forming a tight bond with Sterling, the dog her dad left behind.

Over the course of the week, Holly sorts through her fathers things and discovers a bundle of letters, one for every month since he last saw her, and as she starts to read them she starts to see and understand what happened. There is also a Christmas gift for her for every year that he was absent from her life.

With the bonds forming, Holly has to decide whether to leave her high flying London job and move to the country, or give up the house and dog that gives her such feeling of connection to her dad.

As her and Jack seem to get closer she senses something holding him back and the classic will they wont they you often get in a romace novel takes you right up to the tenth day - Do they get they Christmas wishes? Well you will have to read the book to find out!

What Happens At Christmas was a romantic, festive, feel good book, and although for me personally, the story was a little predictable, it was a nice light read, ideal for reading on a Sunday afternoon after a crazy week!

I would like to thank the publishers for providing a review copy via NetGalley, this was my honest opinion.

I have read What Happens At Christmas as part of the #CarinaChristmas feature run by Rachels Random Reads.
For more reviews, please check out the twitter hashtag.