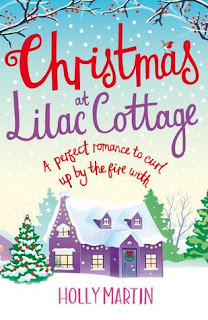 When Henry and daughter Daisy arrive at the cottage to rent the annex, Penny is determined to make them feel welcome. But while Daisy is friendly, Henry seems guarded.

As Penny gets to know Henry, she realises there is more to him than meets the eye. And the connection between them is too strong to ignore…

While the spirit of the season sprinkles its magic over the seaside town and preparations for the ice sculpting competition and Christmas eve ball are in full swing, can Penny melt the ice and allow love in her heart? And will this finally be the perfect Christmas she’s been dreaming of?

It's currently 0750 on a chilly Saturday morning, the sun is starting to creep through the curtains and eyes are red from lack of sleep yet I've got a warm and fuzzy feeling....

Why I hear you ask?

Well, I'm completely and utterly passing the blame 100% over to Holly Martin! I started Christmas At Lilac Cottage yesterday afternoon but had a major headache so although I was reading it, it was a slow process.
After a late afternoon nap, headache gone I was keen to get back to White Cliff Bay, the picturesque setting for the book.
Only phone calls and cooking dinner and then shouting at the rugby from the other room got in my way.

Once sorted I decided the best thing to do was start again.
I devoured through the first 5 chapters and had completely been sucked into Penny and Henry's story.
Sleep came restlessly, I just had to know what was going to happen, so at 2am this morning I caved in and picked up the kindle....

Firstly let's start by looking at the cover - it's gorgeous and from the moment it downloaded I wanted to read but was tied to other review commitments.
There's snow and Christmas lights and more snow... with lilac cottage in the middle looking warm and inviting.
Bookouture certainly know how to do a cover don't they?

I first discovered Holly Martin back in the summer with her fabulous novel, Fairytale Beginnings which you can read my review of here.
I love the way Holly writes, completely drawing you in with descriptive words and quirky locations.
Christmas At Lilac Cottage didn't disappointed in this department.

From the moment I started reading and Penny was taking her mince pies from the oven I knew this book would be brilliant.

Penny Meadows is lonely, and no one wants to be lonely at Christmas. She's decided to let out the annexe to Lilac Cottage and is expecting Henry and Daisy Travis any moment.
Henry arrives alone and quite simply is a grump after getting lost en route. Things don't get off to a good start between the pair, Penny is hoping her tenants will become her friends, casually popping in through the connecting door for a cuppa, whilst Henry think this is outrageous and instantly insults Penny by slamming the door shut and pulling a bookcase over to block it.

When he realises he was rude he is apologetic and you can instantly feel the attraction between them - credit it Holly for her brilliant writing here as at times I felt like I was in Lilac Cottage watching their story unfold live!
Sparks fly between them until Penny meets Daisy - Henry's sixteen year old daughter - and she accuses him of being a pervert having such a young wife. Daisy is in fact his daughter,  and finds the whole situation hysterical.

As much as I loved both Penny and Henry, Daisy was my favourite character.  She was life a breath of fresh air with her ways and banter with her dad but she's had a tough time growing up without a mother and as Henry gets closer to Penny he keeps their relationship secret until Daisy has fully settled in White Cliff Bay - well that's the plan!

Penny has had her heart broken before so letting in Henry is a big thing for her and when they go on a date it comes much to the villages delight, in fact they all rally round to do her hair, waxing and dress shopping!
Penny also grows close to Daisy as they share a love over art, Penny is an ice carver and takes the girl under her wing within her trade.
Although  the book is based over a two week period and is building up to the villages Christmas eve charity ball, there's a lot going on.
Penny is busy with her job yet is invited to things such as ice sculpture competitions, she also saves a drowning boy and almost dies in a freezer.
Henry is super over protective, but looking forward to his new job until he meets the female CEO who makes a pass at him!
Then there's Daisy who is getting closer to Penny's assistant Josh and confides in Penny about taking her relationship with him further...  and it's this that finally puts Penny and Henry's relationship on ice (excuse the pun) before its even really begun!

Christmas At Lilac Cottage is everything you would want from a festive read.
There are funny laugh out loud moments which had me cackling into my duvet at 4 am,  plus real heart wrenching, eyes watering moments, but all in all it is just a perfectly good love story based around the festive season - what more could you want other than a 5 star rating! !

Christmas At Lilac Cottage is the first book in Holly's White Cliff Bay series, the second book being Snowflakes on Silver Cove. Each book can be read as standalone novels, and there are little things that you would notice more from reading both, like characters and locations being mentioned, however it doesn't matter which order you read them in.

I would like to thank Bookouture and NetGalley for a review copy. This has been my honest opinion.


I have read and reviewed this book as part of the publishers Christmas themed week - for more books & reviews, just follow @Bookouture on twitter and search #BookoutureXmas


a Rafflecopter giveaway
Posted by Unknown at 06:30:00